Episode 27 – The Horse of Circumstance

I heard a story about a man riding a horse at breakneck speed. It appears he’s going someplace very important. A man standing along the roadside shouts, “Where are you going?” To which the rider yells back, “I don’t know. Ask the horse.”
This seems to be essentially the story I’m hearing from lots of people today. They’re riding the horse of circumstances, their habits or other people’s expectations. If that describes you, it’s time to grab the reins and move your life in the direction of where you really want to go.
One of the defining moments of my life occurred 1988 when I somehow got a copy of a cassette tape recording of Earl Nightingale called The Strangest Secret. The central message was this – We become what we think about. That opened a door to a whole new world of possibilities for me that has never been closed.


Lets dive a little deeper into this idea that, “You become what you think about most of the time”
In 1989 a Buddhist spiritual text called “How to live without Fear and Worry” stated:
“The thought manifests as the word,
The word manifests as the deed,
The deed develops into a habit,
And the habit hardens into character.”
The words in this text actually echo what Buddha said more than 2500 years ago, “We are what we think. All that we are arises with our thoughts. With our thoughts we make the world.”
In more modern times this sentiment was expressed in relation to sowing and reaping. In 1950 in the Sunday News and Tribune of Jefferson City Missouri it was expressed as:
“Sow a thought, reap a word;
Sow a word, reap a deed;
Sow a deed, reap a habit;
Sow a habit, reap a character;
Sow a character, reap a destiny.”
My favorite version of this idea comes from an American entrepreneur, Frank Outlaw, late president of the Bi-Lo Stores. His version goes like this;
“Watch your thoughts, they become your words;
Watch your words, they become actions;
Watch your actions, they become habits;
Watch your habits, they become character;
Watch your character, for it becomes your destiny.” 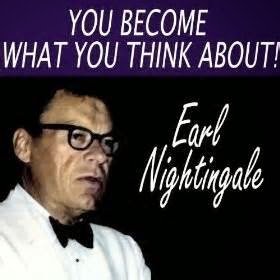 Like Loading…
← Episode 26 – 3 Key Ingredients for a Winning Side Hustle
→ Episode 28 – Why do some people have success while others don’t?